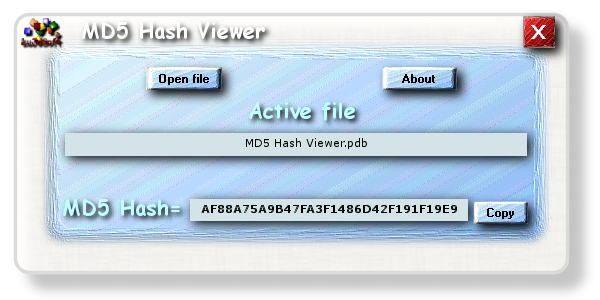 Introduction:
Is a software to get MD5 hash of any file. Include Drag and Drop feature.

What is the MD5 hash?
The MD5 hash also known as checksum for a file is a 128-bit value, something like a fingerprint of the file. There is a very small possibility of getting two identical hashes of two different files. This feature can be useful both for comparing the files and their integrity control.

Let us imagine a situation that will help to understand how the MD5 hash works.
Alice and Bob have two similar huge files. How do we know that they are different without sending them to each other? We simply have to calculate the MD5 hashes of these files and compare them.
Act now, and experience the MD5 Hash Viewer utility for yourself, control your data! Download the MD5 Hash Viewer now!

MD5 Hash Properties:
The MD5 hash consists of a small amount of binary data, typically no more than 128 bits. All hash values share the following properties:

Hash length
The length of the hash value is determined by the type of the used algorithm, and its length does not depend on the size of the file. The most common hash value lengths are either 128 or 160 bits.

Non-discoverability
Every pair of nonidentical files will translate into a completely different hash value, even if the two files differ only by a single bit. Using today's technology, it is not possible to discover a pair of files that translate to the same hash value.

Repeatability
Each time a particular file is hashed using the same algorithm, the exact same hash value will be produced.

Irreversibility
All hashing algorithms are one-way. Given a checksum value, it is infeasible to discover the password. In fact, none of the properties of the original message can be determined given the checksum value alone.

Users browsing this forum: No registered users and 4 guests