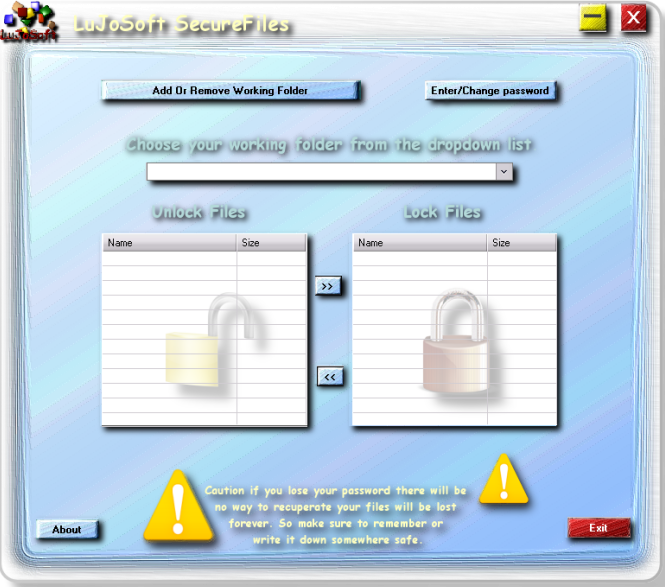 Introduction:
Do you need to keep some of your files unreadable to others? Do you want to be sure that when you leave your workplace your files are secure? SecureFiles is a tool that enables you to encrypt your private files so that no one else can read them.

Key features of SecureFiles: Introduction to Rijndael's algorithm:
Rijndael is the block cipher algorithm recently chosen by the National Institute of Science and Technology (NIST) as the Advanced Encryption Standard (AES). It supersedes the Data Encryption Standard (DES). NIST selected Rijndael as the standard symmetric key encryption algorithm to be used to encrypt sensitive (unclassified) American federal information. The choice was based on a careful and comprehensive analysis of the security and efficiency characteristics of Rijndael's algorithm.

Rijndael is an iterated block cipher. Therefore, the encryption or decryption of a block of data is accomplished by the iteration (a round) of a specific transformation (a round function). Rijndael also defines a method to generate a series of subkeys from the original key. The generated sub keys are used as input with the round function.

Rijndael was developed by Belgian cryptographers Joan Daemen of Proton World International and Vincent Rijmen of Kathlieke Universiteit Leuven. The algorithm that they developed was designed as an easily understandable mathematical structure that can be broken down into simple components. Daemen and Rijmen write in their proposal to AES that Rijndael was designed based on the following three criteria : How to use:
There are very few steps you have to do for using SecureFiles:
Rijndael was evaluated based on its security, its cost and its algorithm and implementation characteristics. The primary focus of the analysis was on the cipher's security, but the choice of Rijndael was based on its simple algorithm and implementation characteristics. There were several candidate algorithms but Rijndael was selected because based on the analyses, it had the best combination of security, performance, efficiency, ease of implementation and flexibility.

Users browsing this forum: No registered users and 1 guest